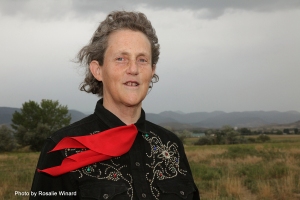 I am very excited to present Temple Grandin, a doctor of animal science and professor at Colorado State University.  Dr. Grandin has pursued her passions, interests and talents and has succeeded in actualizing her tremendous potential despite having {high-functioning} autism. She is also an author, inspirational speaker and advocate for autism.  Dr. Grandin has been listed in the 2010 Time list of the 100 most influential people in the world. I was so inspired after watching the HBO movie made about Temple Grandin’s life that I reached out to her.  I was blown away when she basically agreed the same day to do the interview on the phone.  Wow!  I quickly got my tape recorder set up and within a few minutes we were chatting from her hotel room.  Moral of the story:  Don’t be afraid to ask for what you want, you just might get it.

Now on to the interview:-

What personal qualities have helped you carry on and move in a positive direction?

Well one thing is just to have really good motivation.  People with autism tend to get fixated on things;  and I took my fixation and turned it into a career.  My fixations were things like cattle shoots, optical illusions, kites, and building things.

I had some very good mentors.  As a teenager I had a great science teacher who got me motivated to become a scientist.  Also, Ann, my aunt out at the ranch and Jim, the contractor – these were really important people in helping me develop.  And then of course there’s my mother.  If I hadn’t had her, I would’ve probably ended up in an institution.

What I see with people who have problems who succeed, is that motivation is a really important thing.  In my work at the university, I’ve had a number of students who received masters and Ph.D’s with me and I held the back door open for some promising students who didn’t quite have the good enough grades to go in the front door.  The ones who make it have motivation.

Stretch them, otherwise they won’t advance.

Another thing is build up on the area of strength.  My ability in art was always encouraged.  When I was a young kid, all I wanted to do was draw pictures of horse heads and mother would encourage me, ‘why don’t you do the whole horse’.  You want to broaden it out. You’ve got to learn how to use your ability to do stuff that other people want.  People are not interested in just having me talk about cattle shoots; they want me designing cattle shoots.  You have to learn how to do tasks that other people would want and appreciate.

I’m a big believer in developing your area of strength.  If you’re good with art things, let’s work on art.  Some kids are good in math; others are good with words; some are good with music.  Let’s expand on that.  Whatever strength a kid has, work on building up that area.  It doesn’t matter what it is.

We want to work on building strengths.

My strengths are visual thinking and art.

Did you go a period of self-pity or any other specifically difficult period, and if so what helped lift you out?

How do you see yourself?

People ask me if I could snap my fingers would I not want to be autistic.  Well, I like the way I think.  Autism is secondary for me.  I look at myself as a professor, a designer first.  I define myself by what I do.  I don’t think it’s good when a 9 year old boy walks up to me and all he wants to do is talk about autism. I’d rather him tell about the fact that he likes medieval times, dinosaurs, geology or Disney characters.

One of the things that concerns me now is that I’m seeing too many kids on the autism spectrum where autism is becoming their main fixation.  I don’t think that’s good.

Was there a specific moment, thought or epiphany that helped bring you to a better place mentally and psychologically or did it evolve?

People are always looking for that single magic turning point and there really isn’t one.  It’s a much more  gradual learning.  You learn more and more things every day.

Social skills is a big issue for people on the spectrum.  What is your advice on how to help remediate in this area?

The thing about being autistic is you have to learn these skills like being in a play, where you’re not going to learn them unless someone teaches them to you.  That’s the problem (nowadays it’s not taught well) and I think it hurts some of the younger Asperger kids because they haven’t been taught simple things like how to shake hands – how hard to squeeze, not too hard or soft, not too long.

The normal kids can kind of muddle through it; but the Asperger/autistic kids have to be taught.  Like if I didn’t say thank you, my mother would say, ‘you forgot to say….’ She’d cue me.  She’d give the instruction.  And if stuck out my tongue at the post office, she’d say, ‘that’s rude to do that’.

I’m seeing a lot of older high functioning people on the autism spectrum who have good jobs and have  been employed all their life.  Then I’m seeing  ‘junior’ having a much more difficult time getting a job because he has to learn things like, being on time.  This was drilled into me as a child.

And you can’t just tell people off.  Sometimes you have to do stuff you don’t really want to do.

Do you have any thoughts or mantras that propel you forward?

I had some things back in the ‘70’s.  I remember the plant superintendent said to me, ‘you always have to keep persevering.’  And a cattle buyer told me, ‘trouble was opportunity in work clothes.’  When I was getting my master’s degree I found this poster by Alan Ashley-Pitt on creativity.  This has been on my wall since the early ‘70’s.

“The person who follows the crowd will usually get no further than the crowd.  The one who walks alone is likely to find himself in places no one has ever been before.

Creativity in living is not without its attendant difficulties, for peculiarity breeds contempt.  And the unfortunate thing about being ahead of your time is that when people finally realize you were right, they’ll say it was obvious all along.

What are your educational recommendations to best serve this population?

Well, I think it’s really bad that many schools have taken out the hands-on classes.  Music, art, woodshop, home ec, cooking, sewing, steel shop classes.  These are the classes where a lot of these kids who are different, whether they’re dyslexic, ADHD, autistic, can excel.  And we’ve taken these classes out. It’s terrible.  I speak on this a lot.  These hands-on classes teach problem-solving ability.  They take these classes out because of the tests.  We need to be working the math and reading into those classes.  Take a cooking class for example – look at the measuring you have to do.

You take that Mythbuster show smashing cars together.  You can take that whole show and turn it into a physics class and have the kids do all the math on it.  They may even do better on those standard tests.