Are Limiting Beliefs Holding You Back and Making You Feel Bad...? 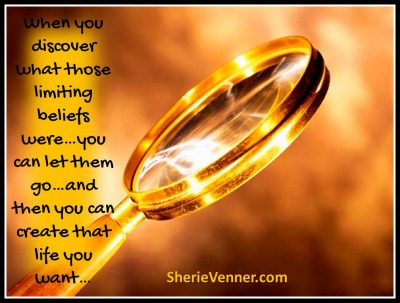 “If you believe yourself to be limited in some way, whether or not it is true, it becomes true for you.”  ~Brian Tracy

I have often wondered why the most formative years of one’s life, in early childhood, tend to be the hardest for us to recall.

Most of us cannot even begin to tap into those memories. Those scant memories that do bubble up to the surface are often fog-tinged and dreamlike. Images or sensations may appear, but the linear, day-to-day recollection evades us.

Perhaps Mother Nature does have a sense of humor, because, oddly enough, it is usually only those traumatic or intense moments of our lives that seem to come up.

Can I remember winning the sack race when I was six? No. Do I recall my first day of school? I remember in vivid detail walking up to the school gates clutching onto my mother’s legs, panicking that I would never make any friends.

I have always thought that these types of memories don’t simply vanish into thin air but rather get stored somewhere in our subconscious.

The problem is that we don’t know the password to access them. The same can be said for things people said to us when we were young children. Those words and life lessons, whether positive or negative, became imprinted on our psyche.

If you were one of the lucky children that constantly heard “The world is your oyster” or “You can do anything you set your mind to,” you probably carried these beliefs into adulthood.

The positive reinforcement received from a young age seems to sustain a secure sense of self, which guides these people through their lives. More often than not, they turn out to be successful, because why wouldn’t they?

(Of course, there are those that receive positive reinforcement from a young age yet somehow morph into self-entitled monsters, but that’s another article).

If others tell you, and you believe, that there is nothing stopping you from achieving your dreams, then chances are you will take more risks in life and your life rewards will increase exponentially.

But what if the opposite were true? What if you were constantly fed a diet of negativity as a child?

If others regularly told you that “You will never amount to anything” and that “You are worthless,” what kind of foundation do you think that provided? A shaky one, and from shaky foundations come insecurity and a wavering sense of self.

Sure, some people who have this kind of upbringing find great success in life, but it is often overcompensation for this self-limiting belief that spurs people on to greater heights and bigger lives.

The drive comes from a need to prove that what they heard as children was wrong; it’s not a drive emanating from the belief “I deserve this” or, to quote L’Oreal, “because I’m worth it.”

I strongly believe that whatever our parents (or parental figures) told us during these formative years remains in our bodies on a subconscious level.

Have you ever had a situation when someone said or did something to you that felt like it struck a nerve? Did someone make a comment to you that unexpectedly brought back a plethora of sensations, fears, or worries that you haven’t felt in years? How does that happen?

We subconsciously reinforce those messages and viewpoints that our loved ones continually reinforced until they become our very own beliefs.

And then we unknowingly pass them on to our children, and on and on the cycle spins. But what would life be like if you could learn to separate yourself from a belief pattern that has no foundation of truth but nonetheless has a hold over you?

My self-limiting belief revolves around money and my attitude toward it. From a young age my parents worked very hard, holding multiple jobs and doing everything in their power to give us what we needed.

As they built their business together, their lives and incomes improved; however, their attitudes toward money did not.

Having come from a place of lack, they didn’t want us to find ourselves in that same place. So the constant message was that saving money is important, and they frowned upon spending frivolously. We learned that you buy only what you need.

While these financial beliefs helped me greatly in certain aspects of my life, I’ve run into some residual issues as a result. In the dominant memories of shopping with my mother, the all important question was not “Do you like it?” but rather “How much is it?”

My mother did not encourage spending on anything but the basics, and she hardly ever splurged on herself.

I internalized the message that it is a bad thing to treat yourself to nice things.

Years later, despite having worked hard to find myself in a financially stable position, the first thing I do when out shopping is to look at the price tag. The voice in my head tells me it’s too expensive. I tell myself, “You don’t need this; what are you thinking?”

In the event that I decide that I do, in fact, need it and like it very much, I drag myself to the register yet spend a good thirty minutes afterward berating myself.

I am fully aware that I do this, but can’t seem to stop myself.

The first step toward change is awareness, and I am consciously aware that I’m a work in progress.

These days when I find myself in the midst of a heated argument with myself in the fitting room mirror, I give myself a pep talk. “Do you like it? Can you afford it?” If the answer is a resounding “yes,” I go right ahead.

So, what’s your self-limiting belief? How does this way of thinking hold you back in life? By encouraging an open dialogue, we can begin to free ourselves from the invisible shackles of these negative beliefs.

The more we hear, read, or speak a word or phrase, the more power it has over us. By staying aware and refuting these beliefs as they come up, their authority starts to wane.

Being consciously aware that we have the power to choose how we think can be wonderfully liberating. We no longer need to react according to some outdated belief system that we inherited, which doesn’t serve our highest potential.

What we choose to shine a light on can no longer carry a hold over us. So maybe it’s time to get out the flashlight, get really honest, and work through those beliefs that no longer serve us so we can put them where they belong, in the trash.

*(She is a regular contributor to Amanda de Cadenet’s website The Conversation).