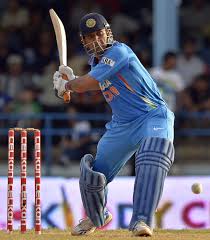 Leave it to me, he says. I want to take this to the last over. Me against one man. One on one. I know I am better than the last man the other team can put up against me. Once again, MS Dhoni reduced a lost match into a one-on-one contest with an opposition bowler, and knocked off the 15 required in just three hits. You could see the bowler - Shaminda Eranga, 9-2-34-2 until then, wickets of Shikhar Dhawan and Virat Kohli to his name - was intimidated the moment he saw the first one fly into the top of the top tier.

Bear in mind that this was a treacherous pitch with seam, spin and uneven bounce. Dhoni was injured, and had come back only for this match. He wasn't running as hard as he does, and wickets were falling at the other end. When Dhoni came in, the asking-rate was 3.35, but with falling wickets and turned-down singles, it hit the improbable towards the end. Dhoni, though, kept refusing singles, kept admonishing the last man Ishant Sharma for taking off for panic-stricken singles.

Ishant couldn't be blamed. The game had unravelled fast for India. They were cruising when Rohit Sharma had braved for yet another fifty despite another painful blow to his body (which makes it atleast four in two innings against Sri Lanka), despite many balls that seamed past his edge, despite the slow start. When India were 139 for 3 in the 32nd over, though, Rangana Herath delivered a grubber, and it squeezed under Rohit's bat. Things were about to change.

The pitch was still difficult to bat on as Suresh Raina soon found out. He thought he had a half-volley from Suranga Lakmal when he went for the drive, but even after pitching that full the ball seamed away appreciably and took his edge. The accurate and wily Herath saw an opening now. And burst through it. In the 38th over, his last, Herath trapped Ravindra Jadeja and R Ashwin - whose combined figures had been 17.5-1-65-6 - in successive deliveries. India 152 for 7.

The drama had begun. Only a few minutes earlier, Mahela Jayawardene and Kumar Sangakkara had gone on and on - for overs it seemed - about an obstructing-the-field appeal against Dhoni. He had taken two steps down the wicket, and then realised he would have hit the other batsman if he ran straight. So he ran, nay hared on a bad hamstring, at an angle, but didn't change his direction for the remaining 20 yards. The throw hit him, and the two senior Sri Lankans would not leave the umpire's side. They knew they needed this man out as soon as possible.

For the next half hour, though, Sri Lanka would have thought they didn't need to get Dhoni out. Dhoni tried to intimidate Lakmal once during the Powerplay, but after that he began playing the percentage game. Sri Lanka knew Dhoni couldn't manipulate the strike with that hamstring, and controlled the game well. Lasith Malinga - seven overs for 54 runs until then - finally got his radar right, and got Bhuvneshwar Kumar toe before wicket with his dipping slower yorker. In the tense overs that followed, R Vinay Kumar lost his cool, and slogged and got out. India 182 for 9 after 46.2 overs.

With any other batsman than Dhoni, you would expect panic. Dhoni, though, wanted to corner just one man. He wanted to bring it down to that one man. He was also daring Sri Lanka to keep back Malinga, who had one over left, for the last. Sri Lanka didn't. Malinga bowled the 48th. Dhoni faced the whole over, looking unhurried, for just a scrambled couple.

The only man hurried was Ishant, who tried a suicidal single off the last ball of Malinga's over to keep Dhoni on strike. The ball, though, had gone straight to the fielder, and Dhoni was miffed Ishant tried such desperation. It was not becoming of someone batting with the coolest and the best batsman in ODI cricket. Ishant would do that again off the first ball of the next over. Twice Dhoni let Ishant know what he did was not right. Ishant faced another dot. Then another dot. Seventeen off nine. Dhoni was cool at the other end. He had marked out his man. He knew it wouldn't be an experienced bowler in the last over.

Two runs came off the last three balls of the 49th over, but Ishant was made to feel under no pressure. He had been told to leave it to the man who knew his way around these lanes. Then began the great show. As soon as Ishant left alone - yes, left alone - the last ball of the 49th over, Dhoni signalled to the dressing room for a new, heavier bat.

As Angelo Mathews psyched Shaminda Eranga up for the last over, Dhoni practised a few swings with two bats held together. Calculatedly he picked out one. Eranga went to his mark. This match should not have been on, but in Dhoni's book this was even odds. Eranga bowled a nervous first ball: a wide length ball, which Dhoni swung hard at. That was a nervous ball, and would have been out of the ground had Dhoni connected. Dhoni didn't.

The second ball, though, was closer to Dhoni - swing, and met that hunk on the up. And up it went. And far. And kept going. Over the top of the stands. You could see it in Eranga's eyes now. It was now going to be nigh impossible for Eranga to execute his skill. In one hit, Dhoni had brought it down to just luck for Sri Lanka. The luck was not with them. Eranga bowed length again, Dhoni went hard again, and the ball flew off the outside half of the bat, and over point.

It was over already. Eranga just ran up for the formalities, delivered another length ball, and was dispatched over extra cover. The iceman had done it again, but he hadn't had a great first half of the day as a keeper and a captain. Apart from not having been at his best with the gloves, Dhoni had also let Sri Lanka off the hook with his choice of part-time bowlers ahead of the specialist spinners, who would eventually go on to cut Sri Lanka's effort short.

Bhuvneshwar had given India his customary breakthroughs in the first spell, the scoring was difficult, but Virat Kohli and Raina provided Sangakkara and Lahiru Thirimanne relief with their odd long hop or big wides. Their partnership took Sri Lanka to 171 for 2, but then Thirimanne made a mistake, and almost every batsman that followed. In over-aiming during that Powerplay, Sri Lanka had lost their last eight wickets for 30 runs, letting Dhoni off the hook now.

You will be justified to think of Dhoni's choice of bowlers as odd. As you would have been with his persistence against all logic with Ishant in the Champions Trophy final. Just that the results were drastically different.