Federer: Nadal From Boy To Man.... 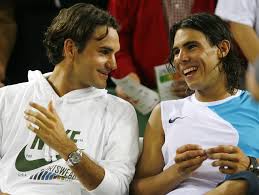 Roger Federer has witnessed Rafael Nadal’s transition from a boy to a man. On Wednesday at Roland Garros, the Swiss reflected on the growth in his rival’s game from their first meeting in 2004, when Nadal was 17 years of age.

“I believe Rafa improved in both. His strengths are even better now and his weaknesses are better, although they're still not as good as his strengths. Of course also he's fitter. He's no longer a young boy. He's a man now. He has experience on top of that. So he really improved. It's spectacular and the results are there to show, to prove it.”

The pair faced off two weeks ago in Rome, their first meeting in a final since 2011 at Roland Garros, and Nadal won in straight sets to improve to a 20-10 mark in their FedEx ATP Head2Head series.

With the victory, the Spaniard claimed his sixth title from eight finals this season and his 41st clay-court crown, second best on the list of Open Era leaders behind Guillermo Vilas with 45. Last year, Nadal won Roland Garros for a seventh time to break the record he shared with Bjorn Borg.

Federer, who has a 2-13 mark against Nadal on clay, weighed how he’d fare against Borg on the surface. “Probably not so good,” he stated. “He was one of the greatest clay court players of all time. He was fighting with the wood racquets, and it was a different time. That's why I never quite know who was the greatest of all time.

“We will never know how we would have all matched up, because Borg would have played totally different in today's age. And Rafa would have played very different back then because you can't play the way he plays today, but great players find a way, and that's what Rafa is showing in these last 10 years.

“It's amazing how successful he is and how he brings it every single match, and he can really enjoy utmost respect [from] all the players for what he has achieved, not only just on clay. He is still stapled off as the clay court guy which he clearly is not anymore.”