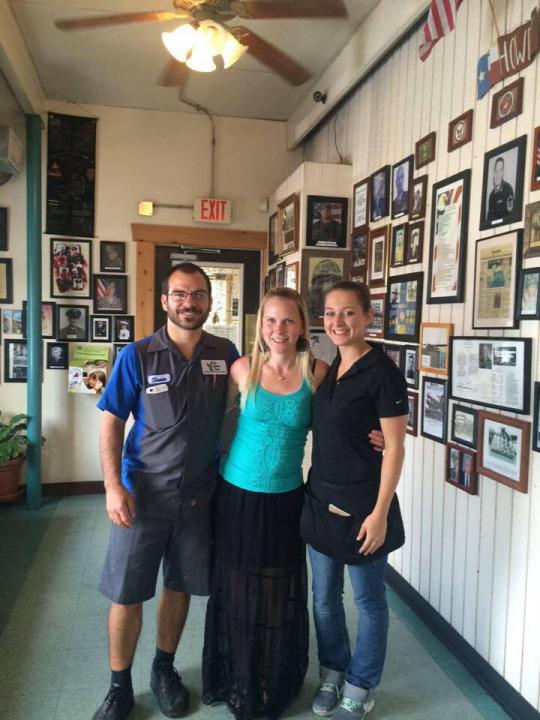 Waitress Kayla Lane, right, picked up the tab for regular customers Shaun and Debbie Riddle, after finding out that the couple lost their 9-week-old baby....

A couple grieving the loss of their 9-week-old daughter got an unexpected surprise when the waitress serving them picked up their tab.

Debbie Davis Riddle and her husband, Shaun Riddle, are regulars at the West Side Café in Fort Worth, Texas. The last time they were at the restaurant, the couple brought with them their newborn daughter, Glory. “They were in the back room and I had to go see her and congratulate them on their baby,” Kayla Lane, a waitress at West Side Café, tells Yahoo Parenting.

When they arrived at the restaurant on Thursday, Lane noticed Glory wasn’t with them. “I said, ‘Didn’t y’all have a baby with you last time?’ And they looked at each other and were quiet, and then Shaun looked at me and said, ‘She passed away four weeks ago,’” Lane says. “I didn’t know what to say. I just said, ‘Oh my gosh, I am so sorry and I know you are hearing “sorry” so much that it’s just another word, but I really am terribly sorry.’ There’s nothing anyone can say to make that better, especially someone like me who has never had a child or lost a child. So I just served them with the best service I could.”

But that’s not all Lane did — at the end of the meal, she decided to cover the couple’s tab. Instead of giving them a bill, she gave them a note that read: “Your ticket has been paid for. We are terribly sorry for your loss. God bless. —The West Side.”

That evening, Debbie Riddle shared a photo of the bill on her Facebook page, with a note. “We eat at West Side Café on Camp Bowie in Fort Worth quite a lot and last month sometime we took our new baby, Glory. Well, we just went there this afternoon and our waitress Kayla remembered us and asked where our baby was. Sadly, we had to tell her baby Glory passed away and is with God now. She felt so horrible for asking but she was so sweet,” she wrote. “When it was time for us to pay our bill, Kayla brings over our receipt. She didn’t even want us to tip her because she said the company took care of her tip as well. We hear so much negativity on the news and so that is why I felt led to share this story in hope that Kayla and this restaurant will get some good recognition.”

Lane says that she didn’t want any recognition for picking up the tab, which is why she said the restaurant covered it. She was outed to the local CBS news by a manager, who confirmed that Lane paid for the couple’s meal herself. It’s a gesture she has performed before — usually for military service members, police officers, or firefighters, she says. “Normally I pick up the check for people who are underappreciated,” she says. “Knowing that I can do some small thing — it might just be a $15 meal, but to them it’s ‘Oh my gosh, someone paid for my meal.’ I feel like I am putting it out there that society is still OK, the world is OK, there are still plenty of good people out there.”

The 21-year-old waitress, who has worked at the West Side Café for four years, says she wanted to cover the Riddles’ check because she admired their strength. “I wanted them to know that even people who don’t know them feel for them and support them,” she says. “I didn’t do it because I felt guilty for bringing it up or even because I felt bad for them. I did it because it was amazing to see their strength through it all — they still prayed before their meal and everything.”

After they realized their check had been paid for, Lane says the couple shared stories and pictures of their daughter — who, at 9 weeks old, never woke up from a nap for reasons that are still unknown, according to CBS. “They are amazing people,” Lane says.

Shaun Riddle says he and his wife were especially moved by the gesture because they consider themselves people of service. “We love to serve others, and this reminded us that there are many other servants in the world, and that the word ‘servant’ is a good thing,” Riddle tells Yahoo Parenting. “We want many to know that love, service, kindness, selflessness, and the love of God is alive and well. It’s not going anywhere.”

Lane says she doesn’t know why this small gesture has gotten so much attention. “This isn’t the first time I’ve done this, and all the servers at the West Side have,” she says. “We take care of our customers.”

According to commenters on Riddle’s Facebook post, the restaurant’s customers agree. “West Side Café earned my undying support a few years ago because of the way they treated my father-in-law,” wrote Brandon Jones. “He was a pretty regular customer. Not matter how busy they were, they wouldn’t rush him out to clear the table. They took the time to get to know him. They were always kind. When he passed, they even went to his funeral.” And Cassy Tatarian Kavanaugh said, “I’m so sorry for your loss. My bill was also paid for by the owner at West Side Café once. I was a really young mother and my baby was crying so I took him to the waiting area so that we didn’t disturb anyone else. I guess the owner noticed that I didn’t get to enjoy my meal and paid for our entire table.”

But Lane says that she and the restaurant aren’t doing anything out of the ordinary. As she says, “It’s what you’re supposed to do.” 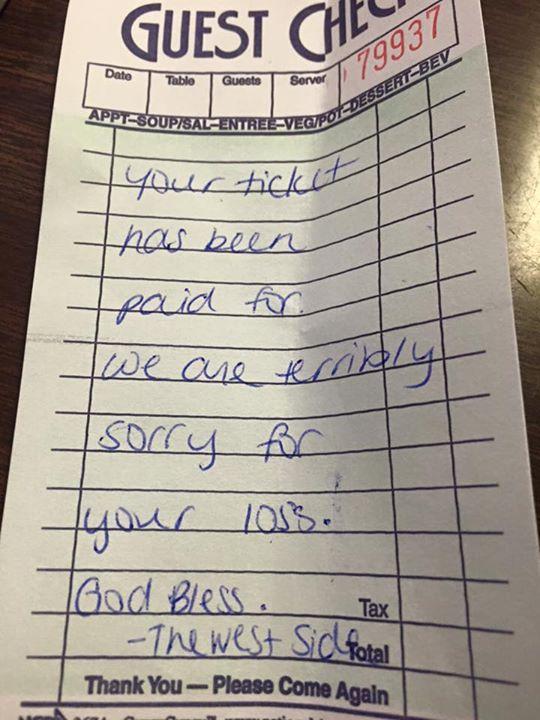 Instead of delivering the Riddles a bill, Lane brought them this note, assuring them their meal was paid for....