10 Foods I Eat Every Day To Beat Depression.... 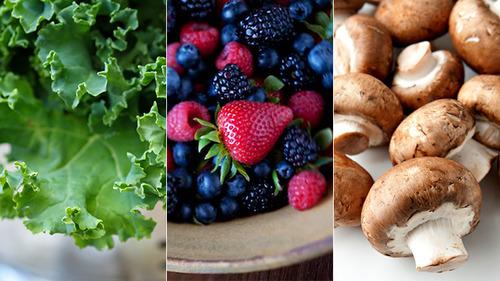 A year ago this month my husband and I started a new diet. It had nothing to do with a New Year’s resolution to lose weight. For about nine months, he had been suffering from bad hives all over his body. It was bizarre. One day he’d wake up and they’d be all over his back. The next afternoon, his lip was swollen so much he couldn’t talk. He had been to a few different allergists and they told him it was “idiosyncratic” (meaning they didn’t know how to fix it) and told him to take Zyrtec indefinitely — until they went away.

“Could it be related to my diet?” he asked.

One guy sent him home with fungus cream that made the tiny red spots swell into ripe, red tomatoes all over his arms.

So he decided to try his own experiment and see if it worked.

The journey started with the book, Eat to Live, by Joel Fuhrman, MD. We bought a used Vitamix, those ridiculously expensive blenders, and we were off: kale smoothies in the morning, homemade almond butter with celery for snack, and black bean soup for dinner.

His hives went away within a few weeks. Apparently the white flour and processed foods were causing the inflammation all over his body. My inflammation is in my brain, a rather complex organ, so my result took much longer — like nine months. But I’m finally starting to feel the real benefit of our diet changes.

Here is a list of 10 foods I eat every day now in order to feel good. These foods provide the nutrients my body needs to fight off inflammation in my brain, which leads to depression.

If you were to choose the healthiest food of all, the most nutrient-dense item available to us to eat, it would be dark, leafy greens, no contest. Spinach. Kale. Swiss chard. Greens are the first of the G-BOMBS (Greens, Beans, Onions, Mushrooms, Berries, Seeds) that Dr. Fuhrman describes in his book, The End of Dieting, the foods with the most powerful immune-boosting and anticancer effects.

“These foods help to prevent the cancerous transformation of normal cells and keep the body armed and ready to attack any precancerous or cancerous cells that may arise,” he writes. They fight against all kinds of inflammation, and according to a new study published in JAMA Psychiatry, severe depression has been linked with brain inflammation. Leafy greens are especially important because they contain oodles of vitamins A, C, E, and K, minerals and phytochemicals.

Walnuts are one of the richest plant-based sources of omega-3 fatty acids, and numerous studies have demonstrated how omega-3 fatty acids support brain function and reduce depression symptoms. A study published in the British Journal of Psychiatry is especially interesting. The lead authors ask the question, Why is the vast biological research — from genetics to psychopharmacology — concentrated on neurotransmitters, when the mammalian brain is approximately 80 percent fat (lipids), and there is a growing body of research demonstrating the critical role of lipids to help brain functioning? What’s more, the shift in the Western diet away from these necessary omega-3 fatty acids over the last century parallels the large rise in psychiatric disorders in that time.

I eat a whole one every day in my salad for lunch. Avocados are power foods because, again, they contain healthy fat that your brain needs in order to run smoothly. Three-fourths of the calories of an avocado are from fat, mostly monosaturated fat, in the form of oleic acid. An average avocado also contains 4 grams of protein, higher than other fruits, and is filled with vitamin K, different kinds of vitamin B (B-9, B-6, and B-5), vitamin C, and vitamin E-12. Finally, they are low in sugar and high in dietary fiber, containing about 11 grams each.

Blueberries, raspberries, strawberries, and blackberries are some of the highest antioxidant foods available to us. I try to have a variety for breakfast in the morning. In a study published in the Journal of Nutritional and Environmental Medicine, patients were treated for two years with antioxidants or placebos. After two years those who were treated with antioxidants had a significantly lower depression score. They are like DNA repairmen. They go around fixing your cells and preventing them from getting cancer and other illnesses.

Here are two good reasons mushrooms are good for your mental health. First, their chemical properties oppose insulin, which helps lower blood sugar levels, evening out your mood. They also are like a probiotic in that they promote healthy gut bacteria. And since the nerve cells in our gut manufacture 80 percent to 90 percent of our body’s serotonin — the critical neurotransmitter that keeps us sane — we can’t afford to not pay attention to our intestinal health.

You won’t find this item on most lists of mood foods. However, it’s included in Fuhrman’s G-BOMBS because onions and all allium vegetables (garlic, leeks, chives, shallots, and spring onions) have been associated with a decreased risk of several cancers.

“Eating onions and garlic frequently is associated with a reduced risk of cancers of the digestive tract,” explains Fuhrman. “These vegetables also contain high concentrations of anti-inflammatory flavonoid antioxidants that contribute to their anti-cancer properties.” Again, if you consider the relationship between your digestive tract and your brain, it is understandable why a food that can prevent cancers of the gut would also benefit your mood.

I try to eat at least six baby tomatoes in my salad each day for lunch because tomatoes contain lots of folic acid and alpha-lipoic acid, both of which are good for fighting depression. According to research published in the Journal of Psychiatry and Neuroscience, many studies show an elevated incidence of folate deficiency in patients with depression. In most of the studies, about one-third of depression patients were deficient in folate.

Folic acid can prevent an excess of homocysteine — which restricts the production of important neurotransmitters like serotonin, dopamine, and norepinephrine — from forming in the body. Alpha-lipoic acid keeps coming up as I read more about nutrition and the brain, so I have begun to take it as a supplement, as well. It helps the body convert glucose into energy, and therefore stabilizes mood.

“Beans, beans, good for the heart. The more you eat, the more you … smile.” They make the G-BOMB list because they can act as anti-diabetes and weight-loss foods. They are good for my mood because my body (and every body) digests them slowly, which stabilizes blood sugar levels. Any food that assists me in evening out my blood sugar levels is my friend. They are the one starch that I allow myself, so on top of a salad, they help mitigate my craving for bread and other processed grains.

When I’m close to reaching for potato chips — or anything else that is yelling “I will take away your pain!” — I allow myself a few handfuls of sunflower seeds or any other kind of seed I can find in our kitchen. Seeds are the last food on Fuhrman’s G-BOMBS list.

Flaxseeds, hemp seeds, and chia seeds are especially good for your mood because they are rich in omega-3 fatty acids. Fuhrman writes, “Not only do seeds add their own spectrum of unique disease-fighting substances to the dietary landscape, but the fat in seeds increases the absorption of protective nutrients in vegetables eaten at the same meal.”

An apple a day could — if eaten with the rest of these foods — keep the psychiatrist away, at least for stretches of time. Like berries, apples are high in antioxidants, which can help to prevent and repair oxidation damage and inflammation on the cellular level. They are also full of soluble fiber, which balances blood sugar swings. A snack I have grown to love is almond butter on apple slices. I get my omega-3 fatty acid along with some fiber.

To see more writings from her, visit :