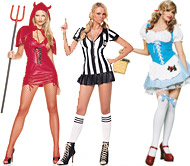 IN her thigh-highs and ruby miniskirt, Little Red Riding Hood does not appear to be en route to her grandmother’s house. And Goldilocks, in a snug bodice and platform heels, gives the impression she has been sleeping in everyone’s bed. There is a witch wearing little more than a Laker Girl uniform, a fairy who appears to shop at Victoria’s Secret and a cowgirl with a skirt the size of a tea towel.

Anyone who has watched the evolution of women’s Halloween costumes in the last several years will not be surprised that these images — culled from the Web sites of some of the largest Halloween costume retailers — are more strip club than storybook. Or that these and other costumes of questionable taste will be barely covering thousands of women who consider them escapist, harmless fun on Halloween.

The trend is so pervasive it has been written about by college students in campus newspapers, and Carlos Mencia, the comedian, jokes that Halloween should now be called Dress-Like-a-Whore Day.

But the abundance of risqué costumes that will be shrink-wrapped around legions of women come Oct. 31 prompts a larger question: Why have so many girls grown up to trade in Wonder Woman costumes for little more than Wonderbras?

“Decades after the second wave of the women’s movement, you would expect more of a gender-neutral range of costumes,” said Adie Nelson, the author of “The Pink Dragon Is Female: Halloween Costumes and Gender Markers,” an analysis of 469 children’s costumes and how they reinforce traditional gender messages that was published in The Psychology of Women Quarterly in 2000.

Dr. Nelson, a professor of sociology at the University of Waterloo in Ontario, said the trend toward overtly sexualized costumes actually begins with little girls. “Heroic figures for women or considered icons of femininity are very much anchored in the femme fatale imagery,” she said, adding that those include an assortment of Disney heroines, witches, cocktail waitresses, French maids and an “interchangeable variety of beauty queens.”

Men’s costumes are generally goofy or grotesque ensembles with “Animal House”-inspired names like Atomic Wedgie and Chug-A-Lug Beer Can. And when they dress up as police officers, firefighters and soldiers, they actually look like people in those professions. The same costumes for women are so tight and low-cut they are better suited for popping out of a cake than outlasting an emergency.

Obviously, however, many women see nothing wrong with making Halloween less about Snickers bars and SweeTarts and more about eye candy.

“I’m not normally going to wear a corset to go out,” said Ms. Colby, who has masqueraded as a Gothic witch with a low-cut bodice, a minidress-wearing bumblebee, a flapper and, this year, most likely, a “vixen pirate.”

“Even though you’re in a costume when you go out to a party in a bar or something, you still want to look cute and sexy and feminine,” she said.

Indeed, many women think that showing off their bodies “is a mark of independence and security and confidence,” said Pat Gill, the interim director of the Institute of Communications Research and a professor of gender and women’s studies at the University of Illinois at Urbana-Champaign.

It is a wonder gyms do not have “get in shape for Halloween” specials.

In her book “Dilemmas of Desire: Teenage Girls Talk About Sexuality” (Harvard University Press), Deborah Tolman, the director of the Center for Research on Gender and Sexuality at San Francisco State University and a professor of human sexuality studies there, found that some 30 teenage girls she studied understood being sexy as “being sexy for someone else, not for themselves,” she said.

When the girls were asked what makes them feel sexy, they had difficulty answering, Dr. Tolman said, adding that they heard the question as “What makes you look sexy?”

But does that mean women should not use Halloween as an excuse to shed a few inhibitions?

“I think it depends on the spirit in which you’re doing it,” Dr. Tolman said. “I’m not going to go and say this is bad for all women.”

Perhaps, say some scholars, it could even be good. Donning one of the many girlish costumes that sexualize classic characters from books, including “Alice’s Adventures in Wonderland,” “Cinderella” and “The Wizard of Oz,” can be campy, female sartorial humor, said Professor Gill. It can be a way to embrace the fictional characters women loved as children while simultaneously taking a swipe at them, she said. “The humor gives you a sense of power and confidence that just being sexy doesn’t,” she said.

Dr. Tolman added that it is possible some women are using Halloween as a “safe space,” a time to play with sexuality. By taking it over the top, she said, they “make fun of this bill of goods that’s being sold to them.”

“Hey, if we can claim Halloween as a safe space to question these images being sold to us, I think that’s a great idea,” Dr. Tolman said.

But it may be only an idea. Or, more fittingly in this case, a fantasy.

“I love to imagine that there’s some real social message, that it’s sort of the female equivalent of doing drag,” Dr. Nelson said. “But I don’t think it’s necessarily so well thought out.”

Tanda Word, 26, a graduate student at Texas Tech University in Lubbock, who wrote a satirical article about the trend for The Daily Toreador, agreed. “I think it’s damaging because it’s not just one night a year,” she said. “If it’s all the costume manufacturers make, I think it says something bigger about the culture as a whole.”

Salacious costumes — the most visible reminder that Halloween is no longer the sole domain of children — have been around longer than plastic Grim Reaper scythes. But there has been an emergence of “ultrasexy” costumes in the last couple of years, according to Christa Getz, the purchasing director for BuyCostumes.com, which sells outfits with names like Little Bo “Peep Show” and Miss Foul Play.

“Probably over 90 to 95 percent of our female costumes have a flirty edge to them,” Ms. Getz said, adding that sexy costumes are so popular the company had to break its “sexy” category into three subdivisions this year.

Heather Siegel, the vice president of HalloweenMart.com, said her company’s sexy category is among its most popular. (The two best-selling women’s costumes are a low-cut skin-tight referee uniform and a pinup-girl-inspired prisoner outfit called Jail Bait).

“Almost everybody gets dressed up really, really sexy for it,” said Carrie Jean Bodner, a senior at Cornell University in Ithaca who wrote about the abundance of skimpy Halloween garb for The Cornell Daily Sun last year. “Even the girls who wouldn’t dream of going to class without their pearls and pullovers.”

Last year Ms. Bodner, 21, dressed up as a sexy pinch-hitter for an imaginary baseball team. This year she and her friends are considering being va-voom Girl Scouts.

Ms. Getz of BuyCostumes.com said far more women are buying revealing costumes than firing off indignant e-mail messages asking, “Why are all of your costumes so sexy?” (though some do).

Still, women may be buying racy outfits because that is all that is available. Ms. Getz said she wished there were more sexy men’s costumes on the market and that the lack of them is but further evidence of the gender double standard. “It’s just not as socially acceptable,” she said, adding that men feel comfortable expressing themselves with Halloween costumes that are “either crude or outrageous or obnoxious.”

Ms. Siegel of HalloweenMart.com said the costume industry is merely mirroring the fashion industry, where women have more variety in their wardrobes. Besides, she said, men are less interested in accessorizing. “They’re happy grabbing a mask and a robe and being done,” she said.

At least they get a robe. Ms. Bodner of Cornell estimated that it will be about 30 degrees in Ithaca on Oct. 31.