Why People Reject Us and What We Can Do About It.... 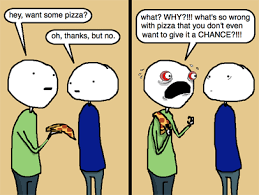 “When we can no longer change a situation, we are challenged to change ourselves.”  ~Viktor Frankl

There’s probably no worse feeling in life than the feeling of being rejected. Whether it’s from the opposite sex, a friend or family member, or co-workers, the feeling that our presence is not wanted or no longer welcomed can cause us to feel hurt and become defensive.

I’ve learned a couple of ways of dealing with rejection when it arises in various situations, and for taking the sting out of it.

The first thing to realize is that rejection isn’t personal. Not really, anyway. It only seems that way because that’s how we tend to look at it.

I’ve found that when people reject us, there are times when there’s something we can learn from it, and there are other times when it’s completely on the other person.

So, let’s take a look at these two experiences of rejection, and discuss ways for dealing with them…

When Our Behavior Turns Others Off:-

People sometimes reject us because of the behavior we exhibit in our interactions with them. When people feel uncomfortable, they’re instinctively going to want to prevent themselves from experiencing annoyance or irritation. And their obvious solution is to remove themselves from our presence.

The result is that we end up feeling rejected by it.

But that’s why rejection isn’t personal. In this case, they’re not rejecting us; they’re rejecting our behavior.

And though it is true that we sometimes associate and attribute our behavior with our identities, it’s not really the case. After all, if you change some of your behavior, aren’t you still the same person? Just because you choose to act in a different way, that doesn’t mean you’re not yourself.

When I was twenty, I had a big crush on a girl I worked with. We went out a few times and it seemed to start off well. But slowly, she started to pull away and avoid me.

It stung. And for a while, I couldn’t figure out what went wrong. I thought about what a great guy I thought I was, and wondered why she couldn’t see that, and why she wasn’t coming to her senses.

But I soon realized that my problem was this: I was focused on why she should like me, not why she didn’t.

I later discovered that I had been acting in ways that made her uncomfortable, ways that turned her off and repelled her, all without realizing it at the time.

I’d call her too often, I’d give her too much attention, always lingering around, I’d buy her gifts to try to buy her affections… the list went on and on.

Once I discovered that these things turned her off, I set out to eliminate them from my interactions in the future. And my results in the dating department changed drastically when I did.

There are lots of behaviors that make almost everyone feel uncomfortable, including dumping our complaints on others, acting needy and clingy, bragging about ourselves, being defensive and argumentative, being overly critical and judgmental of other people, and many more.

Addressing these behaviors takes some introspection. We have to discover what’s motivating them in the first place. And what usually motivates them, ironically, is the desire to gain approval from others.

When we recognize these behaviors and work on them, we’re less likely to make others feel uncomfortable. This doesn’t guarantee other people won’t reject us, but it does decrease the odds that they’ll want to avoid us.

When We Fail To Meet Others’ Expectations:-

People can also reject us because of their own personal prejudices, values, or beliefs.

I’m talking about those situations where someone else has certain expectations for us that we don’t meet up to. This is the case of the son who wants to be a musician, but whose father wants him to be a lawyer. If the son pursues his dream, his dad is going to reject him.

Or the introverted and reserved boyfriend who feels rejected because his girlfriend criticizes him for not being more outgoing, like her.

Sometimes rejection is simply caused by an incompatibility of values, beliefs, or personality types between people.

This is that scenario where rejection happens because people disagree with our life choices, or because they simply have different opinions, lifestyles, or personalities than us.

In these cases, all you can really do is accept that someone else is rejecting you because of their expectations for you. Again, it isn’t really personal. It’s often due to someone else’s inability to accept you for who and where you are. And they are entitled to that choice.

Accept that this is generally their issue, not yours. Or it could just be a compatibility issue neither of you is responsible for.

Knowing How to Respond to Rejection:-

It’s not always easy to recognize if there’s something to learn from rejection, or if the rejection is merely a consequence of someone else’s unmet expectations. But the distinction becomes much clearer when we develop self-awareness about our behaviors and how they affect others.

Either way, understanding the causes of rejection can take the sting out of it, because it’s never about who we are. It’s about what we’re doing. And we can either work to change that, or recognize that someone else is unable to accept it, and that’s completely on them.