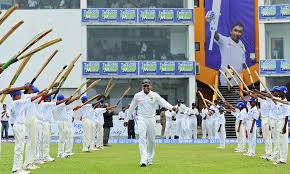 Resuming the fourth day of the second and final Test against Pakistan at 49 not out, the 37-year-old added five more runs before being caught off spinner Saeed Ajmal. The former Sri Lanka captain's innings lasted 137 balls and included eight boundaries.

The right hander received a standing ovation as he made his way back to the pavilion with the Pakistani fielders applauding. Jayawardene raised his bat to acknowledge the crowd's gesture.