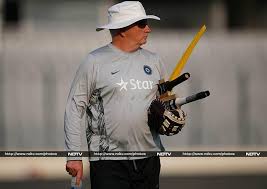 An infuriated Sunil Gavaskar has blasted the Indian team and said it was high time to for the management to take some tough decisions following the embarrassing 1-3 Test series loss to England.

Gavaskar was upset that the young Indian team was refusing to learn from past mistakes.

"Even till two days, I was defending the team. But you see them today, they have made the same mistakes over and over again. It means the team is not learning. Do they care about it? I don't know," Gavaskar was quoted as saying by NDTV after India suffered a 1-3 Test series loss to England Sunday at The Oval in London.

Gavaskar wondered how much rope could be given to young players before taking a tough decision.

"Most of these players have played in South Africa, New Zealand and England. How much of a rope do you give a young player? I think somewhere down the line some firm decisions have to be taken. I don't know if they will be taken," he said.

Citing the example of Australia, Gavaskar said successful teams have the ability to take tough decisions when they are down in the dumps.

"One of the reasons why Australia have clawed back to the top spot is that they take tough calls and that is the need of the hour for India," he said.

The former India captain was tongue-and-cheek in suggesting that India should stop playing Test cricket for while. He believes that nothing is going to change despite a string embarrassing defeats overseas.

Gavaskar feared that the humiliation in the Tests would soon be forgotten if India did well in the ODIs. India will now take on England in an ODI series and a one-off T20. Test routing could soon be emotions of the past.

At the end of the day, however well you do in limited overs cricket, it is Test cricket that defines you as a cricketer, defines your place in the history of the game. If you are going to have all the Test wins and all the Test losses swept under the carpet, then you are not going to make any progress," Gavaskar said.