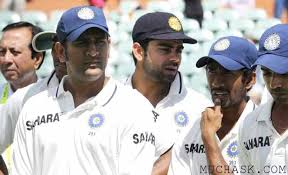 Manchester:  After India's abysmal defeat in the fourth Test in less than two and a half days - by virtue of which they now trail 1-2 in the series - Indian cricket need sweeping changes.

It is all the more ironical that this should be the case for the Board of Control for Cricket in India (BCCI) is said to enjoy greater financial resources than the rest of the cricketing world put together.

To begin with, at the Test level, Mahendra Dhoni is an asset and a liability.

Technically, he has limitations as a batsman, but an admixture of a responsible approach and tenacity helps him to compile runs even in challenging conditions, as he proved in the first innings of this fourth Test.

He has never been and never will be a Test quality wicket-keeper. He drops too many catches, sometimes doesn't even attempt to convert chances which are his, misses stumpings and Saturday made a mess of a run out opportunity to lend a life to the hard-hitting Jos Buttler.

Wriddiman Saha is not only better with the gloves, but in Test cricket has the potential to contribute as many runs as Dhoni.

Besides, Dhoni's choice of slip fielders in this series has also left a lot to be desired.

What is most worrying, though, is his cluelessness as captain at the Test level when circumstances are not going his way. His bowling combinations and changes on the third day of the day were baffling.

If he was going to give the new ball to Pankaj Singh, why did he bowl him in the morning? If he had to use a spinner, why not give priority to Ravichandran Ashwin, who has looked more capable than Ravindra Jadeja?

The highest strata of the game demands you think on your feet in the middle, not depend solely on ideas conceived in the dressing room.

The cupboard looks suddenly bare after Virat Kohli's conspicuous failure against swing bowling, notably James Anderson, in England. But surely, a calm temperament alone cannot be a quality for Dhoni's continuation as captain.

Lord's now looks a flash in the pan. England were bound to come back hard. India did not seem to realise this. They took their feet off the pedal, and instead of remaining positive after going one up in the series went on the defensive in the next Test at Southampton, thereby surrendering the initiative.

The trio of batsmen - Murali Vijay, Cheteshwar Pujara and Ajinkya Rahane - who were so promising in the early part of the series are now a shadow of their former selves. They could not even survive in the best batting conditions of the match.

Shockingly, the Indian batsmen have made a bowler out of a part-time spinner - Moeen Ali - who has no arm ball, no doosra, only an innocuous off-break.

The way Jadeja has batted and bowled, particularly after his showing with the willow, it would be scandal if he was retained for the fifth and final Test.

If Ishant Sharma regains fitness, will India have the courage to play him and three other specialist quicker bowlers plus Ashwin?

At the end of the day, the top five specialist batsmen have to come to the party. If they do, then the four plus one attack would be in business.

The fact is Stuart Binny, who was dropped after the second Test, looked technically sound in a match saving knock in the first. And he would probably have been among the wickets in the swing friendly atmosphere of Old Trafford.