Catherine Zeta-Jones Talks About The 'Triggers' For Her Bipolar Disorder.... 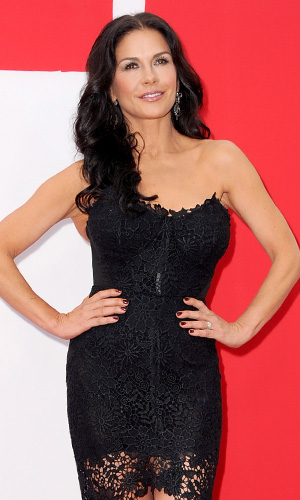 A-list stars typically don't get very candid in interviews, but Catherine Zeta-Jones isn't afraid to have an open discussion about her life … particularly when it comes to her ongoing battle with bipolar disorder.

Ever since the "Red 2" actress announced in 2011 that she had been diagnosed with the mental illness, we've been impressed with how straightforward she's been about her situation and her commitment to continued treatment. In April, she checked herself into an in-patient center for the second time and has said that she'll continue checking herself into facilities periodically for the rest of her life.

In a new interview with the U.K.'s Telegraph newspaper that took place at her home in New York, Zeta-Jones, 43, explains that the stress of her husband Michael Douglas's battle with throat cancer two years ago was a trigger for the disease.

"[Bipolar] is something I have been dealing with for a long time," she tells the paper. "When you get sideswiped like that [with Douglas's illness] it's an obvious trigger for your balance to be a little bit off – not sleeping, worry, stress. It's a classic trigger."

Zeta-Jones has said many times before that the reason she talks openly about her bipolar disorder is because she hopes that bringing greater awareness to it may help others. "I know I'm not the only person who suffers with it or has to deal with it on a day-to-day basis," she adds. "So if I’ve helped anybody by discussing bipolar or depression, that’s great."

In the interview, she also talks about the nerves she faces before big events, such as her recent turn revisiting her Velma Kelly character from the movie version of "Chicago" at the 2013 Academy Awards. "I get terrified the first day I'm on a film set," she explains. "I get nervous walking down a red carpet. I find making speeches the most terrifying thing in the world."

So how does she deal with it? "I have this system. I torture my husband and everyone around me with my nerves and anxiety. Then, when I get on stage, the fear is gone. I've exhausted myself. It just dissipates."

Of course, it may be hard for many to understand how a woman this busy, raising two children ages 10 and 12, maintains her stunning looks. "I have a ballet barre in my gym," she reveals. "I turn the music up so loud that the walls are pulsating, and I go for it for an hour."

And if working out, motherhood, and acting isn't enough to keep her busy, she has more she still wants to tackle. "I’ve always wanted to do a one-woman show in Vegas," she shares. "I want to be able to paint – I am trying, but so far I am not very good at all, although it gives me such solace and peace of mind."

Apparently, so does fancy footwear. When the writer points out the untouched pairs of Louboutins lining her bookshelf, Zeta-Jones responds, "I buy shoes sometimes and use them as bookends. They’re too beautiful to wear."