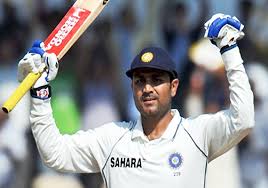 Swashbuckling opening batsman Virender Sehwag will become India's ninth cricketer to play 100 Tests when he walks onto the field at Mumbai's Wankhede Stadium Friday in the second cricket Test against England.In the 99 Test matches he has so far played, the 34-year-old amassed 8,448 runs at an average of 50.89 and a staggering strike rate of 82.45 to boot -- amazing figures for a Test batsman.

The Delhi batsman has scored 23 hundreds over the last 12 years, including four double centuries and two triple centuries with a highest of 319 scored against South Africa at Chennai in March 2008. That was his second triple ton, the first (309) being against Pakistan at Multan in 2004. The knock against the Proteas included 42 boundaries and five sixes and came at a rollicking strike rate of 104.93.

Sehwag became the first Indian to score 300 runs in an innings eclipsing V.V.S. Laxman's memorable 281 which he scored at Eden Gardens in 2001, and that March 2004 innings in Multan earned him the title of 'Sultan of Multan.'

These two big ones put the 'Nawab of Najafgarh' in elite company as one of the only four batsmen to have scored two triple centuries. The others are cricket's demi-god Don Bradman, batting legend Brian Lara and destructive West Indian Chris Gayle.

Sehwag, who made his first-class debut as a bowler who was a handy bat lower down the order, was moved to the top by skipper Sourav Ganguly at Lord's in 2002 to find a place for him in the side as he could not have fitted in the middle-order. This reluctant change came about after he became the 11th Indian to score a hundred on debut batting in the middle-order against South Africa in Bloemfontein in 2001.

In his first Test as an opener, Sehwag struck a belligerent 84 and he came to stay as an opener, though he kept saying that he would prefer to bat in the middle-order despite his resounding success as an opener.

He revolutionised the game with his approach as an opener, amassing runs at a frenetic pace. His strike rate of 82.45 is the best for any batsman who has aggregated 2000-plus runs.

Viru's performance away from home is also quite impressive, considering that the Indian batsmen have to bat on much faster and seamer-friendly pitches overseas.

After scoring his first century in over two years in the Ahmedabad Test against England, one can only expect more fireworks from the explosive batsman who former India coach John Wright described as "the limited overs batsman who revolutioned Test cricket".